The need for Electoral Reform in New Zealand is not a recent requirement. The early pioneers perceived flaws in the party-political parliamentary system of their day. Unfortunately, the reformers failed to convince their colleagues for change and we had to wait for the Mixed Member Proportional system enacted in 1993 for a chance to do better.

The time is well past for further improvement to the electoral process. 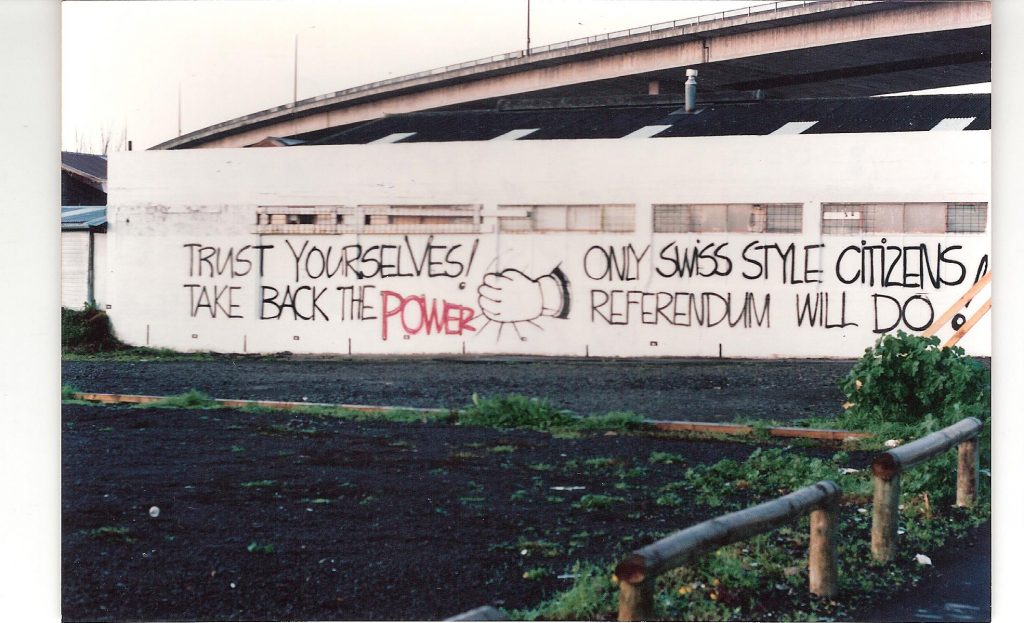 Photo taken in the mid 1980’s of a building leased by Don McKenzie. Showing above and behind is the Newmarket Overbridge.

CONSTITUTIONAL REFORM COMMITTEE (REPORT OF), TOGETHER WITH APPENDIX.

Extract from the Journals of the House of Representatives

Ordered, “That a Committee be appointed, with power to call for persons and paper, to inquire into and report as to the form and working of Executive Governments elsewhere,

With a view to such modifications of the existing system of government in New Zealand as will diminish the evils of the present party system; the Committee to consist of the Honourable, Mr. Bryce, Mr. Palmer, Captain Russell, Dr. Newman, Mr. Buick, Hon, Sir J. Hall, Mr Saunders, Mr J. W. Thomson, Hon, Mr. Ward, and the mover; three to be a Quorum.”- (Mr. O’Connor)

“Your Committee have the honour to report that, in their opinion, many and very serious evils are inseparably connected with, and spring from, the system of party government here; that it is unsuited to such a colony as New Zealand; and that in other colonies, and even in England, similar evils have been felt, varying only in degree, consequent upon surrounding circumstances and different phases of the system.”

The Report goes on to explain the “evils” of the party system of government;

Therefore, in a large parliament not so many can aspire to be cabinet material as in a smaller parliament as in New Zealand whereas every second member (or all) may believe that they are cabinet ministers in waiting.

Combined with the rule whereby the government is dependent on its existence from day to day on the support of a majority of members (voter’s representatives) and we see “a constant temptation of the members to struggle not for the common good of the nation, but for the possession of power and place”.

In less than three months the committee reported back to parliament thus;

“In the opinion of your committee, the most suitable model for our imitation will be found in the present Government of the Swiss Federation. After twenty-six years’ experience, the Constitution accepted in 1848 was revised and improved in 1874 and has worked remarkably well ever since. Both the original of 1848 and the revised Constitution of 1874 were the work of a committee of able and experienced men, many of whom were thoroughly conversant with the forms of government adopted both in Great Britain and in the United States; and by taking that which has proved good and suitable from either, they have succeeded in avoiding the weaknesses of both”.

Here is the link to the Constitutional Report of 1891:

The complete sixteen-page report together with the committees reasoning is here (PDF version).

Or here: Constitutional Report of 1891