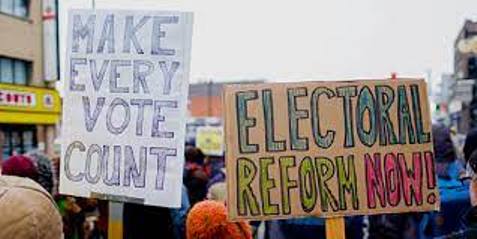 At election time the one issue that sticks out a mile is the high threshold that the smaller parties have to hurdle. A 5 % threshold is manifestly unfair. Any threshold is unfair let alone 5%.

Unfair to the 9 % of voters in the 2020 Covid election who stuck to their principles and voted for a small party knowing full well that their vote was likely going to be given away to a larger party.

Further, how many voters decided not to vote for a smaller party although they the voter were in tune with the policies of a smaller party? They worried about a wasted vote.

The Mixed Member Proportional (MMP) system of government was enacted over 20 years ago to modify the “first past the post system” and winner takes all. Remember the Upper House which could act as a handbrake was abolished in the 1950’s. Look what we have finished up with, essentially a one-party state. Clearly with the current government hell bent on forcing co-governance on us all, MMP needs to be revised, improved and modernised to ensure that all voters can have their say without handicap and safe in the knowledge that we have “equal suffrage”.

A study of the Swiss system of Modern Direct Democracy shows that the Swiss have no party threshold for their national elections. The result is that in the Federal Parliament they finish up with 11 or more, parties of various size and flavour. Currently the largest party in the Swiss assembly holds 29.4 % of the vote, The remainder progressively down to .3% of the vote. Yes, that’s right, less than 1%. The Swiss parties have to form alliances with other parties to legislate and as you can see the power of the largest party or parties is curtailed. The result is that legislation is less likely to be rushed through. The issue is thoroughly examined before enactment. The Swiss have other measures to ensure that the Swiss voters have their say. The tools of Modern Direct Democracy make the Swiss voter sovereign over parliament. Effectively they become the “opposition”. We could do with those tools, but first the threshold has to come down.

All the small parties need to get together and collaborate on the threshold issue. The best of party policies will go nowhere, unless the party has a voice in parliament. Think of all the time, advertising and other costs associated with running an election campaign. All that effort down the drain.

How long can we continue with this unfair arrangement? Of course, time money and effort will be needed. My own view is that the small parties have to work together. Collaboration will be more important than policies.